"Fain would they put out the light of Allah with their mouths, but Allah will perfect His light however much the disbelievers are averse." — Holy Qur'an 61:8

Ya Ali Madad. On the occasion of Idd-e-Navroz please accept our heartfelt felicitations! May Mowla grant peace, prosperity, happiness, barakat, higher spiritual enlightenment, spiritual & luminous tayid (help) and empowerment to you, your family, your Jamat and the worldwide Jamat in the New Year. Ameen.

Let us first reflect upon the card which was prepared by the Late Alwaez Rai Amiraly Amlani which was first published in 2004: 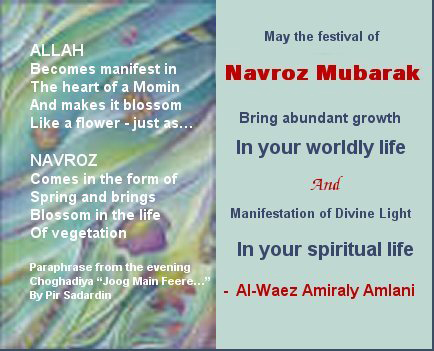 The Ismaili Muslim Tariqah is an esoteric Tariqah and culminates in mystical dimensions for those who conduct a personal search under the supervision of Noor Mowlana Shah Karim Al-Hussaini Hazar Imam (a.s.). These are difficult matters because we hope to go beyond this material world of cause and effect, and into the world of Soul and Light. The challenge is to first start reflecting deeply on mystical experiences so that we can understand the position of our True Imam. This will lay a firm foundation for our personal search for higher spiritual enlightenment. Then, we can start or continue with our personal search.

In this post, I will be presenting: (1) key concepts of mysticism (Sufism); (2) a summary of historical events regarding the luminous links between the Holy Prophet Muhammad (s.a.s) and Mowlana Murtaza Ali (a.s.); and (3) a luminous dhikr, Noore_Karim_Hazar_Imam, which describes the position of our Holy Imam.

Lyrics for the above sound track are presented in Part 7.

Through Ismaili Mail, I came across the audio and the transcript of Independent Television Interview given by Mowlana Hazar Imam on 4th June, 1985. The resources are located on the NanoWisdoms site at the following URL: http://www.nanowisdoms.org/nwblog/3134/. In response to the question, 'One of the myths surrounding you ...', there were a couple of sentences which caught my eye:

" It is certainly true to say that the Western World doesn?t necessarily understand the theology of Shi?ism nor indeed the theology of many mystical sects whether they are Shia or Sunni or Christian. Mysticism, in its, in its essence is difficult."

The quotation leads to the question, what is mysticism? Let us explore this concept further.

Here are a couple of paragraphs from Professor Chittick's lecture which was presented at the David M. Kennedy Center for International Studies, Brigham Young University, in May 2003:

"Scholars who focused on understanding the objects of faith became differentiated into several schools of thought. The dogmatic theologians (the authorities in kal?m) said that the best way to understand God is by rational interpretation of the Koran. The philosophers (fal?sifa) held that human reason is a sufficient guide to the truth of things and that divine revelation may not be indispensable for understanding that truth. The Sufis maintained that the best and most reliable path to correct understanding was by direct communion with God.

Scholars associated with Sufism developed a distinctive methodology. With good reason, their approach has often been called "mystical." Webster's second definition of mysticism tells us that it can mean "the doctrine or belief that direct knowledge of God, of spiritual truth, or ultimate reality. . . is attainable through immediate intuition, insight, or illumination and in a way differing from ordinary sense perception or ratiocination." This doctrine is certainly characteristic of the Sufi approach to understanding God and the world. However, they held that this direct knowledge ?which they typically called "unveiling" (kashf)?must be rooted in the Koran and the Sunnah of Muhammad. Many of them also had a good deal of respect for the various rational approaches to knowledge. They maintained, however, that despite the opinions of the philosophers, reason alone is not sufficient to attain knowledge of God, and despite the opinions of the theologians, a merely rational understanding of the Koran is also inadequate. "
Source: William C. Chittick. 2003. Download 'Mysticism in Islam' Lecture PDF Excerpts from pp.9-10

From the above, it is clear that there are three methods of learning: (1) rational interpretation; (2) philosophical understanding; and (3) direct communion with higher realities.

Let us put all this in context through an example. We first learned the Arabic text of our Holy Dua. Then, we learned the meaning of the words and sentences and were taught the philosophy of our Holy Dua by a large number of learned wazeins. They explained to us the relationships between Allah, the Light of the Holy Prophet Muhammad (s.a.s.), the Light of the Holy Qur'an, the Light of Mowlana Murtaza Ali (a.s.), the Noor of Imamat and the Noor of Mowlana Hazar Imam. This conceptual knowledge is important, but it not comparable to the actual experience of seeing the Light during the recitation of the Holy Dua. That experience would be a Didar in itself. The didar of Light is called 'unveiling' or 'kashf'. Is this concept presented in our Tariqah? The answer is yes ... please read on!

In his Usul-e-Din firman made in Dar es Salaam on September 29, 1899, Noor Mowlana Sultan Muhammad Shah (a.s.) has described Pir Shams as the one who followed the faith steadfastedly to achieve an exalted destiny. Mowla has described Pir Shams as the one who was passionately in love of the Spirit which enabled him to reach the sacred sanctuary. The Pir's path was focused on the Haqqiqat and through it, he experienced the Marifat. He was blessed with the ultimate didar i.e., the vision of the Imam's holy countenance.

When our Holy Prophet (s.a.s.) was 43 years old, he had a meeting with the dignitaries of his family in which he asked who among them would support him in the divine mission and shoulder the task so that he may be his Brother, his Lieutenant, the Executor of his will and his Vicegerent and his Successor in the office after him. Mowlana Murtaza Ali (a.s.) who was only 13 years of age, was the only person who give an affirmative answer to the Holy Prophet (s.a.s).

"The Holy Prophet continued to acquaint the people on all opportune and appropriate occasions with the Divine and unique status of Ali as his Vicegerent, in various ways and manners of expression (over the next 20 years), viz:

"Ali being awarded the following epithets (or appellations) exclusively for himself as none else before or after him could ever earn any one of them:—

"... The tradition says that therefrom Abdul Muttalib the Divine Light got itself bifurcated (i.e. divided) into two rays, one passed into the seed of Abdullah and the other, the seed of Abu Taleb. Here the Holy Prophet says, 'From Abdullah I was chosen to be the Last Prophet of God and from Abu-Taleb came Ali as a Second to me as the First Imam. And this bifurcation was reunited through the medium of the Holy Lady, Fatima, the daughter of the Holy Prophet and with this started the godly line of the Holy Imams to be continued to the last.'

Notice how the above is related to the teachings of Pir Shihabu'd-Din Shah Al-Husayni (a.s.) from the book entitled 'Risala Dar Haqiqat-i-Din' which was translated from Persian to English by W. Ivanow. Here are a couple of excerpts from Chapter 7 : 'Itrat, or Close Relatives':

"Muhammad and 'Ali were manifestations of the one and same Divine Light, but they came in two different persons (libas, —dress) in order to uphold each other's mission amongst humans, and in order to introduce each other to the people." (p.25)

"The sacred Light which manifested in Muhammad and 'Ali continued through Fatima, in her sons, Hasan and Husayn, and no power in the world can extinguish this Light. It is said: 'they wanted to extinguish the Light of God, but God brings His Light through, to the end', i.e., to the completion of its mission." (p.25)

Let us perform the luminous dhikr of Noore_Karim Hazar_Imam with utmost humility and tenderness of the heart (length 4 min 41 sec; 6.5 MB).

The lyrics are given below:

Our Holy Imam is intensely involved in creating a better quality of life for millions of people around the world. He also has spiritual (ruhani) and luminous (noorani) dimensions. In this article, we have attempted to understand the luminous (noorani) position of our True Imam. It is important to think about this dimension in order to prepare for or continue a personal search. This is also the best time to embark on such a mission because we will be blessed with a zaheri (outward) noorani didar during his visit (whenever it takes place), and a batuni (inward) noorani didar in our prayers and bandagi. May the barakat of the auspicious occasion of Idd-e-Navroz bring us material, spiritual and luminous blessings! Ameen.