"Can he who was dead, to whom We gave life, and a light whereby he can walk amongst men, be like him who is in the depths of darkness, from which he can never come out?" — Holy Qur'an 6:122

The Ahlul-Bait are Spiritual Centers for True Believers

Ya Ali Madad! On the occasion of the commemoration of the great spiritually uplifting event of Idd-e-Ghadir, the first Imamat Day of our first beloved Holy Imam, Amirul-Mu'mineen, NOOR Mowlana Murtaza Ali (a.s.), please accept our heartfelt felicitations!


Let us first reflect upon the following ayat from the Holy Qur'an and the associated footnotes: 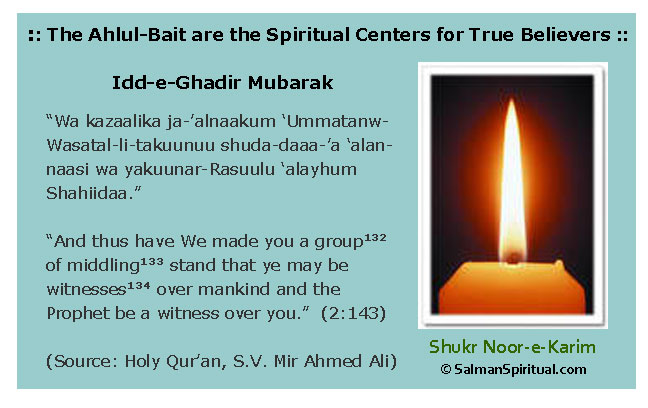 (1) 'Ummat', literally meaning a people or a community, need not always mean the same for the word Ummat has been used in the Holy Qur'an for a single individual—'Inna Ibrahima kana ummatun qanitan lillahi'.

(2) 'Wasat', literally means middle, hence it is used for just and equitable, which means remaining exactly on the middle point without inclining to either direction. As the straight line between two points can always be only one, only one and not more can occupy the exact middle point. The word is undoubtedly used with great praise. It is also logically established that the one so greatly praised should essentially be void of, or free from every kind of pollution or imperfection. The opposite of equity is injustice. And the greatest injustice according to the Holy Qur'an is 'Shirk', 'Innash Shirka lazulmun Azeem' (31:13). Verily, associating (anything) with God is the greatest iniquity [i.e., intentional twisting of a given standard].

...In this regard Ali-ibne-Abi Taleb who, besides the Holy Prophet, had never in his life bowed before anyone else other than the One and the Only True God. In the correct meaning and the proper sense of the word Wasat none can be meant but Ali and beside him the other Imams who are divinely chosen ones and who are the heavenly commissioned guides. Besides, it is essential that the Ummat-e Wasat whom God Himself declares to keep them as such must be as free from pollution of every kind of evil as the Holy Prophet himself was. They must be 'Ma'soom', i.e. sinless or infallible. They are none other than the Holy Ahlul-Bait who are the only purified ones by God Himself (33:33)

(2) 'Shahid', means witness used in the sense of 'Raqeeb' or 'Mohaimin' a close watcher or a careful observer. Witness in a true sense or in the completeness of the meaning of the word means one who can give evidence upon every aspect of the event, both the manifest and the hidden factors. The word 'Shaheed' is used for God, the witness over everything—'Innallahu ala Kulle Shaiyin-shaheed—Verily God is a witness over everything—22:17. These witnesses over people must essentially be perfect. Can the Muslims, in general, play this role? It will be said 'No'. Only a very few who by nature must be pure and themselves perfect in all aspects of their lives. Such ones can be no other in Islam than the Holy 'Ahlul-Bait' about whose personal purity God had declared in Vr. 33:33, 'Innama yuridullaha leyuzhiba ankumur rijsa Ahlal-Bait wa yutahhirokum Tathira—' O' Ahlul-Bait—Verily God hath willed to keep away from you every pollution and to purify you a thorough purifying.

A similar announcement has been made by God in the Holy Qur'an vide 4:42 and 16:89 in which it is said a witness from each Ummat (i.e., from the people or the followers of each prophet) will be called to bear witness upon the truth and the conduct of the people, and the Holy Prophet Muhammad will be called to bear witness upon all witnesses. For further explanation to these verses see notes to the respective verses.

The Holy Imam Zainul Abideen is reported to have said:—'Nahnu Shuhada Allah'—We are the witnesses of God. The same is reported of Ameerul-Momineen Ali-Ibne-Abi Taleb.

Thus the Ummat-e-Wasat' are only the Holy Imams—and their position among the Muslims—is that of the 'Ka'ba' to the Muslims world, towards which Muslims necessarily turn. In the absence of the Holy Prophet, the Imams of his Ahlul-Bait are the spiritual centers to which every true believer in God has to resort to for correct guidance and the necessary inspiration of goodness and virtue. The closer anyone is attached to these spiritual magnets, the more he will be conditioned with their divine attributes and get qualified for the praise from God and to receive the honour of being associated with the real 'Ummat-e Wasat' like Salman, who for his faithfulness and the closest attachment to the Holy Prophet, was bestowed with the unique honour of being called 'Minna Ahlul-Bait, the honour and privilege which was given to none else outside the family of the Holy Prophet.

The following excerpt is taken from the appendix titled 'A Philosophical Commentary' written by Christian Jambet (translated by Hafiz Karmali) in the book 'Paradise of Submission — A Medieval Treatise on Ismaili Thought. A new Persian edition and English translation of Tusi's Rawda-yi taslim by S. J. Badakhchani, I. B. Tauris Publishers in association with The Institute of Ismaili Studies, London. 2005.

"We discover the heart of Ismaili morality in Nasir al-Din Tusi's view presented in Tasawwur 22 where is guiding principle is indeed that of refinement of behaviour and customs, of ethical purification (tahdhib-i akhlaq) as in classical ethics in the world of Islam [§265-299].19 We see, however, that this concept, inherited from peripatetic thought and Stoicism, underwent a number of modifications that ultimately changed its intention and meaning. Admittedly, the purification is first ordered, in typical Avicennian style, to the aims of the Intellect; it is the first step on the path of acquisition of perfections pertaining to the soul (kamalat-i nafsani); it is what prepares the soul to receive intelligible ideas.20 But where the philosophers situate the finality of ethical purification in the contemplation of primary intellects, Tusi identifies another object desirable at the highest level: moral effort, with an inclination for happiness, in knowing the inner nature of the Imam, of a knowledge which leads to the knowledge itself of God; it is adherence to knowledge in the Imam of the appearance of the Word of God.21 Morality is a battlefield from which emerges victorious he who contemplated Divinity in the mirror of the spiritual figure of the Imam; and moral combat has no other justification than this vision."

19. The influence of Miskawayh's Treatise on Ethics on Nasir al-Din Tusi is apparent in the Akdlaq-i Nasiri. But one cannot ignore also the similarity of some of these themes with those of the present treatise, such as the role of the Imam, or rather the theme of 'perfect ones', defined by a curious synthesis of Peripatetism and radical Shi'i eschatology. See M. Arkoun, Traité d'éthique: Traduction, introduction, notes du Tadhib al-akhlaq de Miskawayh (Damascus, 2nd ed., 1988), pp.116, 161 and 184.

Recognition of the Essence of the Holy Imam

The recognition of the essence of the Holy Imam leads to salvation as described in the following verse of Saloko Nano granth of Pir Sadardin (r.a.):

Angelic Salwat Nazrana:
Let us now start presenting a nazrana of at least 101 salwats or continuous salwat for 3 to 5 minutes to our beloved NOOR Mowlana Shah Karim Al-Hussaini Hazar Imam for the fulfillment of our noble wishes. May our beloved Mowla continually keep us on the Right Path. Ameen.

May we all be blessed with many, many Batini-Noorani Didars in our personal search for higher spiritual enlightenment through the Noor of Mowlana Hazar Imam. Ameen.