"Then those who believe in him, and honour him, and help him, and follow the light which is sent down with him: they are the successful." — Holy Qur'an 7:157

Post Diamond Jubilee Spark :: Mi'raj: The Flight to the City of Placelessness

Ya Ali Madad. On the occasion Mi'raj, the commemoration of the journey in which our Holy Prophet (s.a.s.) attained the status of fana fi'llah and baqa bi'llah using ism-i azam (symbolized by Burraq, the mystical horse), please accept our heartfelt felicitations!

May Noor Mowlana Hazar Imam grant peace, prosperity, happiness, barakat, higher spiritual enlightenment, spiritual & luminous tayid (help) and empowerment to all of us, our families, our Jamats and the worldwide Jamat. Ameen.

Let us also reflect upon our soul's flight to the City of Placelessness from an excerpt of a mystical poem of Rumi: 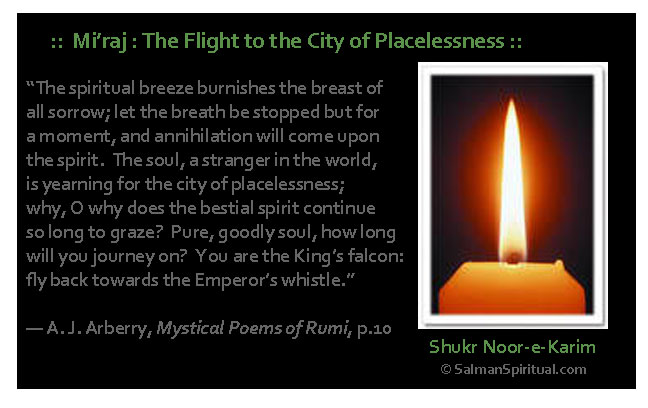 For this enlightenment post, I have used the following resources: (1) An excerpt from 'Mystical Poems of Rumi'. A. J. Arberry, 1968, University of Chicago Press, Chicago; (2) Excerpts from 'Mystical Dimensions of Islam' by Annemarie Schimmel, The University of North Carolina Press, Chapel Hill, North Carolina, 1975; and (3) Excerpts from M. Ali Lakhani's Chapter titled 'The Metaphysics of Human Governance: Imam 'Ali, Truth and Justice' from the book titled 'The Sacred Foundations of Justice in Islam: the teachings of 'Ali ibn Abi Talib' by M. Ali Lakhani, Reza Shah-Kazemi and Leonard Lewishon; edited by M. Ali Lakhani, World Wisdom, Bloomington, Indiana and Sacred Web Publishing, Vancouver, BC, 2006.

There is a wealth of knowledge on the topic of Mi'raj across the Muslim Ummah and there are several articles on this website as listed below. However, I have been able to discover deeper aspects of Mi'raj through the resources mentioned above. Please reflect deeply on these excerpts.

The Purity of the Holy Prophet Muhammad (s.a.s.)

This described by Annemarie Schimmel as follows:

"Sufism traces its origin to the Prophet himself. He is described in the Koran as ummi, "illiterate" (Sura 7:157-158). a quality that is center to the understanding of Islamic religiosity: just as in Christianity, where God reveals Himself through Christ—the word made flesh—the virginity of Mary is required in order to produce an immaculate vessel for the divine word, so in Islam, where God reveals Himself through the word of the Koran, the Prophet had to be a vessel that was unpolluted by "intellectual" knowledge of word and script so that he could carry the trust in perfect purity."
(Source: Mystical Dimensions of Islam, pp.26-27)

The link of the Holy prophet to Sufism is described by Annemarie Schimmel as follows:

"Muhammad is the first link in the spiritual chain of Sufism, and his ascension through the heavens into the divine presence, to which the first lines of Sura 17 allude, became the prototype of the mystic's spiritual ascension into the intimate presence of God. According to the tradition, esoteric wisdom was transmitted from Muhammad to his cousin and son-in-law 'Ali ibn Abi Talib, the fourth of the righteous caliphs (d. 661). Other members of his family and his friends, according to legend, were endowed with mystical insight or pursued mystical practices."

"...In a comparatively short time, Muhammad's personality gained great importance for the spiritual life of his community: He was the ideal leader, and the duty of every Muslim was to imitate him. His veneration soon reached mystical heights, until he was conceived by the medieval mystics as the Perfect Man par excellence, the cause and goal of creation, the friend of God and the intercessor on behalf of his community."

Holy Prophet Muhammad (s.a.s.) as a Model of Pure Love and Surrender

This is described by Annemarie Schimmel as follows:

"...When the later mystics boasted of the alleged or real illiteracy, which permitted them to read only letter alif, the symbol of divine unity and uniqueness, they had the Prophet's example always before their eyes—the model of pure love and surrender, as opposed to cold reasoning."

"The main object of mystical meditation, however, was Muhammad's night journey, the mi'raj, his ascent through the spheres—a topic only touched upon in the introductory verse of Sura 17, but lavishly elaborated in later legends. The connect of mi'raj to daily prayer—which was experienced by Muhammad as a repetition of the joy of ascension (H 302)—made such an ascension into the divine presence possible for every sincere Muslim. The mystics applied ascension terminology to their own experiences in the rapture of ecstasy."

What Danger Do we Face on our Return Journey?

This is interpreted by M. Ali Lakhani as follows:

"The view that the world is not a "permanent residence " and that humanity is "journeying" to some distant shore of "perpetual happiness and comfort" [as described by Noor Mowlana Murtaza Ali] is in accord with the traditional view that we have discussed earlier. Human beings are in exile from their Origin, and their passage through this world may be viewed as a journey of Return. They are, however, buffeted by the "furious storms" of the world and, we are told, are "not out of danger". What is this "danger" that renders one's position so precarious?"

"The "danger", according to Islamic tradition, is twofold: firstly the forgetfulness of our spiritual patrimony, that "man is made in the image of God"; and secondly, our spiritual responsibilities that result from knowing our nature, which include loving and serving God and His creation for "man is God's representative on earth". The first of these dangers corresponds to our forgetfulness of the Divine Covenant (in Qur'anic terms this translates into our breach of the Covenant of Alast referred to earlier, where man undertook to remember his Spiritual Origin, which is also the Center of his being)."

"The second of these dangers corresponds to our neglect of the Divine Trust (in Qur'anic terms this translated into our repudiation of our vow of Amanah referred to earlier, whereby man assumed the responsibility to regard creation as a theophany and to treat with the respect owed to it on account of its sacred Origin). The commitment of the Covenant entails for the humanity the burden of the Trust. To ignore the Covenant implies an abrogation of one's divine responsibilities towards the creatures of God."

(Source: The Sacred Foundations of Justice in Islam, pp.28-29)

What are the Solutions?

This is interpreted by M. Ali Lakhani as follows:

"In terms of previous analysis, we might note that the two forms of error, namely, the error of the blind or hubristic intellect and the error of unprincipled and unyielding will falling into temptation, correspond respectively to errors in regard to the two categories of questions central to human existence that we have discussed earlier. Thus, the weak intellect errs by virtue of its failure to discern reality—that is, it is cut off from the transcendent vision of the spiritual integrity that binds humanity to all creation; and the weak will errs by the virtue of its failure to conform to reality—that is, it abrogates its responsibility to sacralize life through action."

"From a metaphysical viewpoint, creation is a cosmic veil which—depending on our perception—can either conceal or reveal the spiritual light of compassion by which the whole creation is sustained. It is faith that "opens our eyes", thereby enabling us to become spiritually literate, so that we perceive creation with eyes of faith, with spiritual "imagination" or metaphysical transparency, by looking beyond the apparent opacity of the veil to the transcendence beyond, in act of divine grace—for the scripture states "God guides His Light whom He wills". It is thus given to each one us to conform our individual wills to the Divine Will, so that we are open to His grace while remaining critically engaged by our intellects. It is through this combination of receptivity and alertness that true faith operates."

(Source: The Sacred Foundations of Justice in Islam, pp.29-30)

There are numerous firmans on the topics such as divine remembrance (dhikr, bandagi), balance between din and duniya, transcendence (i.e., Allah is above all else), personal search, bandagi, and ism-i azam. May I humbly suggest that we reflect upon and address the following questions:

May our beloved Noor Mowlana Hazar Imam blesses us by awakening our soul so that it return to its Origin with full luminosity. Mi'raj Mubarak!

Gratitude for the bounties of Mi'raj

Let us now start presenting a nazrana of at least 101 salwats or continuous salwat for 3 to 5 minutes to our beloved NOOR Mowlana Shah Karim Al-Hussaini Hazar Imam for the fulfillment of our noble wishes. May our beloved Mowla continually keep us on the Right Path. Ameen.

In this post Diamond Jubilee year period, may Noor Mowlana Hazar Imam fill our spiritual hearts with his NOOR and nothing else. May we all be blessed with many, many Batini-Noorani Didars in our personal search for higher spiritual enlightenment through the Noor of Mowlana Hazar Imam. Ameen.