"He it is Who sendeth down clear revelations unto His slave, that He may bring you forth from darkness unto light; and lo! for you, Allah is Full of Pity, Merciful." — Holy Qur'an 57:9

Gaining an Entry into the Grand Assembly of Holy & Heavenly Beings

We are now in the year 2020 and a brand new decade. This has inspired me to look into fundamental concepts of our existence and purpose of our lives through the teachings from the Holy Qur'an and our Holy Imam.

(Please rotate the phone to see the whole graphic) 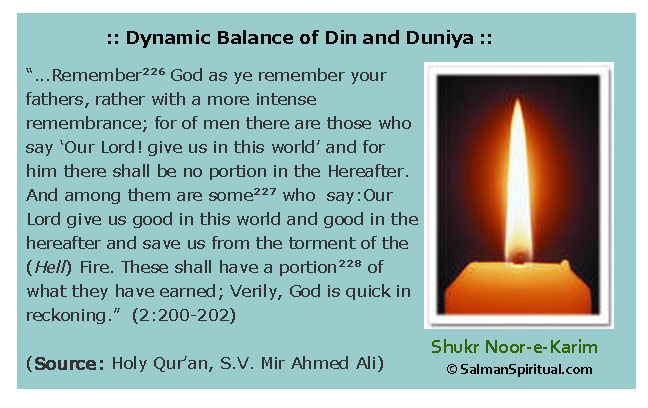 "Vr. 2:200. (226) 'Remembrance of ancestors refers to the old customs of [those] days, the people praising or boasting of the greatness of their fathers or ancestors. The pilgrims were bidden to remember God and glorify Him who would make them much greater than their forefathers.'

"Vr. 2:201. (227) 'Those who pray for the present life only or only for the hereafter show that they feel themselves secure in the life for they do not pray for, without the help of God. Hence the prayer of a true and a sincere believer must be for both the life here and also for the life hereafter. The prayer for both lives, enjoined upon Muslims by the Holy Qur'an, indicates that Islam wants a human soul to adopt a middle course between materialism and asceticism (i.e., one-sided spiritualism discarding the material life altogether).'

"Vr. 2:202. (228) 'Prayer on the part of the doer of the best deeds, is essential for the acceptance of deeds. Thus praying also is a duty along with the other good deeds one does. This verse indicates that the account of each human individual of his personal goodness as well as his badness, is always then and there effected, both on the debit as well as credit side. Our accounts go in advance of ourselves.'

Noor Mowlana Hazar Imam gave us the concept of balance between Din and Duniya in 1973 and expanded it to include the intellect in 1994. Then the concept of higher spiritual enlightenment was identified as one of the key themes during the Golden and Diamond Jubilees in 2007 and 2017, respectively. All these concepts can be linked to the ayats mentioned above.

Here are three important ayats on the above topic:

'Verily2010 We have adorned the heaven nearest to this world (earth) with an adornment, the stars' (37:6)

"Vr. 37:6. (2010) ''Sama'ad Duniya', i.e., the Lower Heavens—See 67:5, 72:8. The nearest heaven to the earth is the Lower heaven, lower than the other heavens, the seat of the Exalted Assembly of the Angels. The beauty of the starry skies is proverbial. Here is the implied the marvellous beauty and the well-planned grouping and the perfectly harmonious working of everything in the heavens manifesting the Unity, the Power and the Wisdom of the One All-Perfect Designer, Creator and the Supreme Master of the Universe.'

"Vr. 37:7. (2011) 'The perfect, the harmonious, the undisturbed and the continuous movement of everything in the heavens, is itself obvious and sufficiently eloquent in its declaration that the Kingdom of God is perfectly planned and entirely guarded against any rebellious elements, material or spiritual, venturing to disturbing it. The functioning of the heavens manifest not only the inimitable divine beauty but also the glory of the power and the authority of the Omnipotent Creator. Goodness is always protected by the All-Good, against evil.

There is the mention of the shooting stars—See 15:17-18. Goodness is original and real, and evil is alien and opposed to it and has no permanence, for evil is only the act of rebelliousness against goodness out of vicious desires of the devilish urge. Such corrupt souls or evil spirits who lose, out of their own wickedness, the native urge of rising above the material world. The attempt on the part of such polluted spirits to rise, not to gain the glories of the honourable heights for they have lost the title to it, but with their inquisitiveness to know what is there in the higher regions, the right to enter which, they have forfeited. When such unwarranted attempts are made by evil spirits to rise into heavenly heights, they are repelled and thrown down to their base, the abyss.'

"Vr. 37:8. (2012) 'It is said that the evil spirits, perhaps as a respite, could approach the lower heavens and while they did so, they used to get some information from that region about the future and used to adulterate the knowledge with some falsehood on behalf of their own selves and inspire the matter to their devotees on earth but since the advent of the Last Apostle of God and the revelation of the Final Code of Guidance, the Holy Qur'an, even this approach to the first or the lowest region above, has been stopped, and since then no evil one could have any knowledge from the higher regions where the Grand Assembly of holy and heavenly beings, is said to be held. '

Part 3: The Power of Meditation (Bandagi)

The book 'Marifat Na Phool' has lectures of Missionary Nasserbhai Abdullah which were recorded in Gujrati by Alwaez Rai Shamsuddin Bandali Haji. This book was translated by Bahadurali Jamal Manji, Ph.D. into English and was published as 'Flowers of Divine Knowledge'. Here is an excerpt from this book:

'When a person is completely absorbed in meditative prayers of God, then the soul which is pervading extensively in the human body becomes consolidated towards God. With the practice of meditative prayers, he who visualises his own soul or has gotten closer to God causes the pervading soul in the human body to be consolidated in God. He has in his lifetime separated his soul from his body. The soul which has risen to such heights of elevation cannot be caught by death. The soul knows the time of death before hand, and prior to the time of death it frees itself from the physical body and reaches the state of angels. In this angelic state there is no resurrection for the soul, and there are no questions asked at the time of death. Thus it enters into the mercy of God.'

Vision for the New Year/New Decade: Noor Mowlana Hazar Imam has often told us that the material world is not the only world which deserves our attention. In Sura Fateha, we come across the phrase, 'the Lord of the Worlds'. We live in the physical world, the world of thoughts, the world of the Soul, the world of the Light and the world of Oneness, simultaneously. However our investments of time and energy decrease as we go towards the subtle worlds.

Noor Mowlana Hazar Imam has told us to foster the growth of our soul because it is the source of courage, strength, wisdom to see worldly problems from a spiritual point of view and a perpetual well of immense happiness. Let us make a concerted effort to grow our soul in 2020 and in this new decade. Ameen.

Angelic Salwat Nazrana:
Let us now start presenting a nazrana of at least 101 salwats or continuous salwat for 3 to 5 minutes to our beloved NOOR Mowlana Shah Karim Al-Hussaini Hazar Imam for the fulfillment of our noble wishes. May our beloved Mowla continually keep us on the Right Path. Ameen.

May we all be blessed with many, many Batini-Noorani Didars in our personal search for higher spiritual enlightenment through the Noor of Mowlana Hazar Imam. Ameen.