"But God will deliver them from the evil of that Day, and will shed over them a Light of Beauty and (blissful) Joy." — Holy Qur'an 76:11

Post Diamond Jubilee Spark :: Teachings on Charity from the Holy Qur'an and Hadith

Ya Ali Madad and Idd Mubarak! On the most auspicious occasion of Idd ul-Fitr, please accept our heartfelt felicitations. May Allah grant material, spiritual and intellectual happiness to Muslims all over the world, and to all those who have submitted their wills to He Who is Above All Else. Ameen.

Let us first reflect upon the following ayats from the Holy Qur'an and also read the footnotes: 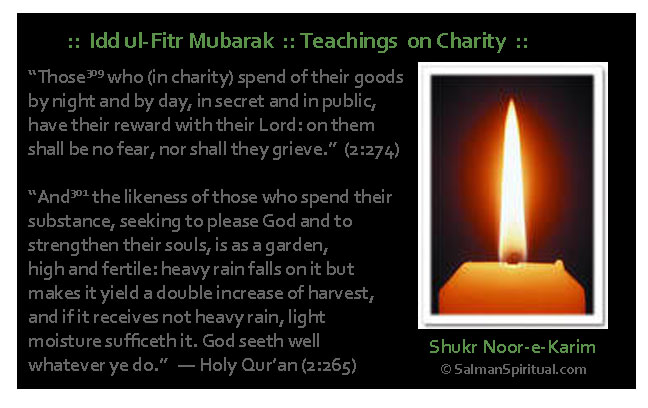 "Vrs. 2:265. (301) The extraordinary or special stress on charity that Islam lays, is a clear evidence of main or sole object of religion being the welfare of the human race as a whole, and thus the creed being undoubtedly a universal religion revealed by the Creator Lord of all, Who has Himself made Mercy incumbent upon Himself (Vr. 6:12 and 6:54).

No other religion in the world has stressed so much upon charity as Islam has done. It is a cardinal doctrine or the fundamental article of the practice of the faith, closely associated or identified with the 'Wajib' or the compulsory prayer to God. The faith, Islam, when translated into action take the form mainly of prayer and charity. Faith unless proved in action is nothing but a bogus claim, acceptable neither by man nor by God.

The merit of charity lies in the spirit or the intention underlying it. The tall trees of a garden do not very much depend upon the rainfall. To draw sufficient nutrition from the soil in which they have sent roots very deep, it makes very little difference to such trees whether it rains heavily or lightly. The heavy or light rain is compared to external circumstances that seems to make a difference in the productive aspect of charity.

The verse exhorts to assure the sincere believers in particular and every member of the human family in general that every act of virtue has an energy of its own, to grow in this life and also in the next, and it has fountains of life to draw upon even if there were nothing to nourish them."

Hadith: Sadaqa has to be from Lawful Sources

"Abu Huraira reported God's messenger as saying, "If anyone gives as sadaqa the equivalent of a date from something lawfully earned, for God accepts only what is lawful, God will accept it with His right hand, then foster it for the one who gave it as one of you fosters his colt, till it becomes like a mountain." (Bukhari and Muslim) "

"Abu Dharr reported God's messenger as saying, "When you smile in your brother's face, or enjoin what is reputable, or forbid what is objectionable, or direct someone who has lost the way, or help a man who has bad eyesight, or remove stones, thorns and bones from the road, or pour water from your bucket into your brother's, it counts to you as 'sadaqa'. Tirmidhi transmitted it , saying that is a gharib tradition. "

Hadith: Sadaqa Stands in the way of Calamity

"Ali reported God's messenger as saying, "Give the sadaqa without delay, for it stands in the way of calamity." Razin transmitted it."

"Marthad b. 'Abdallah said one of the companions of God's messenger told him that he had heard him say, "The believer's shade on the day of resurrection will be his 'sadaqa'." Ahmad transmitted it."

Gratitude for the bounties of Idd ul-Fitr

Let us now start presenting a nazrana of at least 101 salwats or continuous salwat for 3 to 5 minutes to our beloved NOOR Mowlana Shah Karim Al-Hussaini Hazar Imam for the fulfillment of our noble wishes. May our beloved Mowla continually keep us on the Right Path. Ameen.

In this post Diamond Jubilee year period, may Noor Mowlana Hazar Imam fill our spiritual hearts with his NOOR and nothing else. May we all be blessed with many, many Batini-Noorani Didars in our personal search for higher spiritual enlightenment through the Noor of Mowlana Hazar Imam. Ameen.